Postcards from Crouch End Why Crouch End? Come and find out why its the centre of the Universe!

Sit back, relax and enjoy. Guitarist and composer Sam Piha brings together for the first time a catalogue of his own compositions and collaborations. These performances are a delightful musical reflection on travels from and experiences in the magical North London village of Crouch End. Featuring music as diverse as the reflective Crouch End Waltz and Crouch End Broadway and the driving motion of Shinkansen (Japanese bullet train). Also featuring Louise on flute for Why Grimsby? and the haunting Cold Wild Wood.

No silly noises or distressing twangs! Just beautiful sounds and melodies. The compositions highlight such diverse musical influences as Classical, Folk, Jazz and Latin all performed on solo guitar or as guitar/flute duos. All pieces are featured on the recently released recording Postcards from Crouch End and include the wonderful Tachi-ai which was record of the week on Lyric FM Ireland.

Sam Piha produced, directed and brought to Edinburgh the spectacular Caramba show a Latin/Spanish music and dance show with 6 musicians vocalists and dancers. This was featured on BBC radios late junction programme. Sam is now bringing a completely different musical journey through his own compositions. 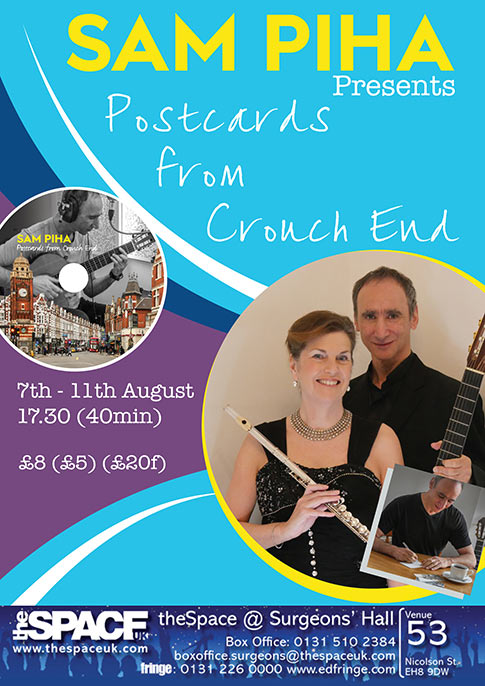